How to read the scoreboard

The scoreboard is a table that summarizes the history of the game so far at a glance. By checking the scoreboard in Baccarat, you can check the continuity of winning and losing, etc., so that it will help you to predict whether Player or Banker will win in the next game. The scoreboard is also the biggest attraction of Baccarat, so you can enjoy Baccarat more by learning how to look at it. 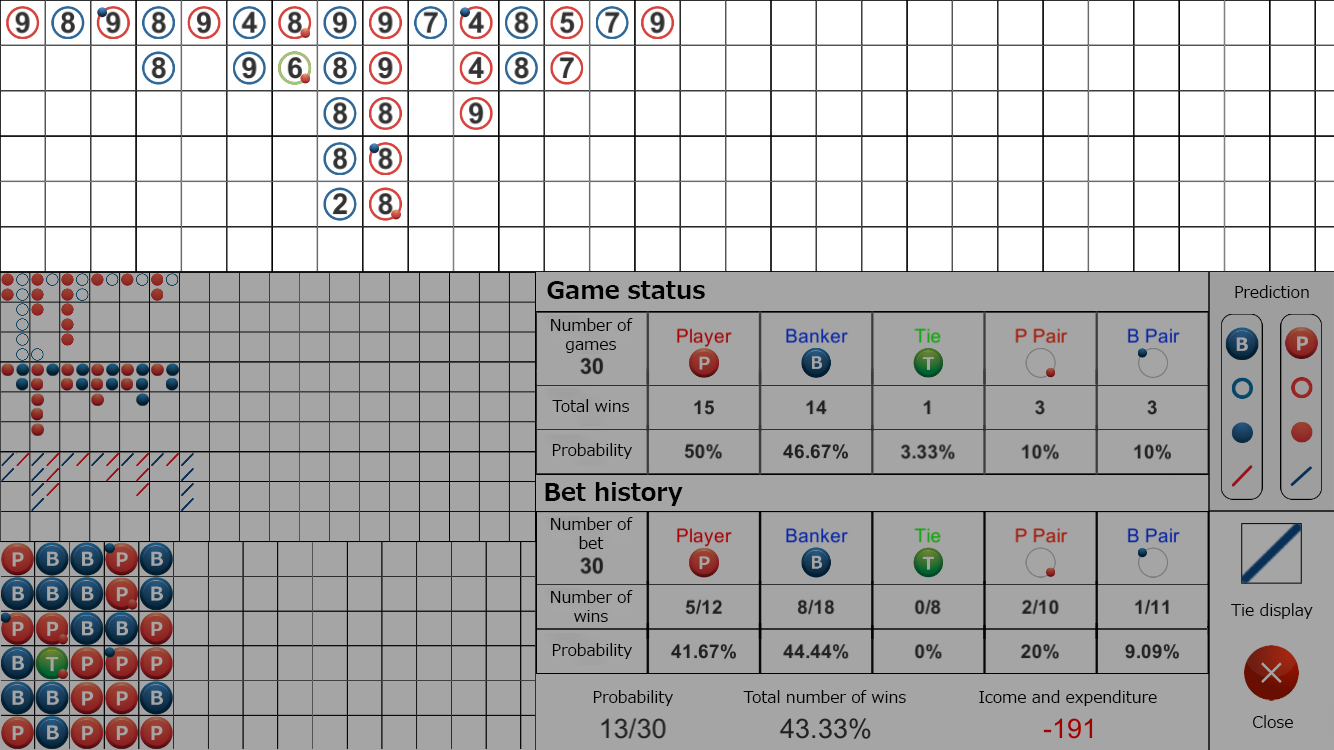 The street is left-aligned, with a red display appearing if the Player wins, a blue 〇 appearing if the Banker has won, and the number of each victory in the 〇. In the case of Tie when the numbers of Player and Banker are the same, a green circle is displayed, and the number at that time is displayed in 〇. In Baccarat 9, the colors can be swapped, so the Player color can be changed to Blue and the Banker color can be changed to Red. In addition, Tie can be hidden, so if it is set to hide, the previous game will be displayed with a yellow-green diagonal line in 〇. When a pair comes out, in the case of a Player pair, a small red 〇 appears at the lower right of 〇, and when a Banker pair comes out, a small blue 〇 appears at the upper left of 〇.

If a Player or Bank Officer wins consecutively and cannot display a continuous score below this point, the score will be moved to the right and will continue to the right as long as the sequence continues.

Oji is a simple scoreboard where game results are recorded as it is, so in the case of the above scoreboard 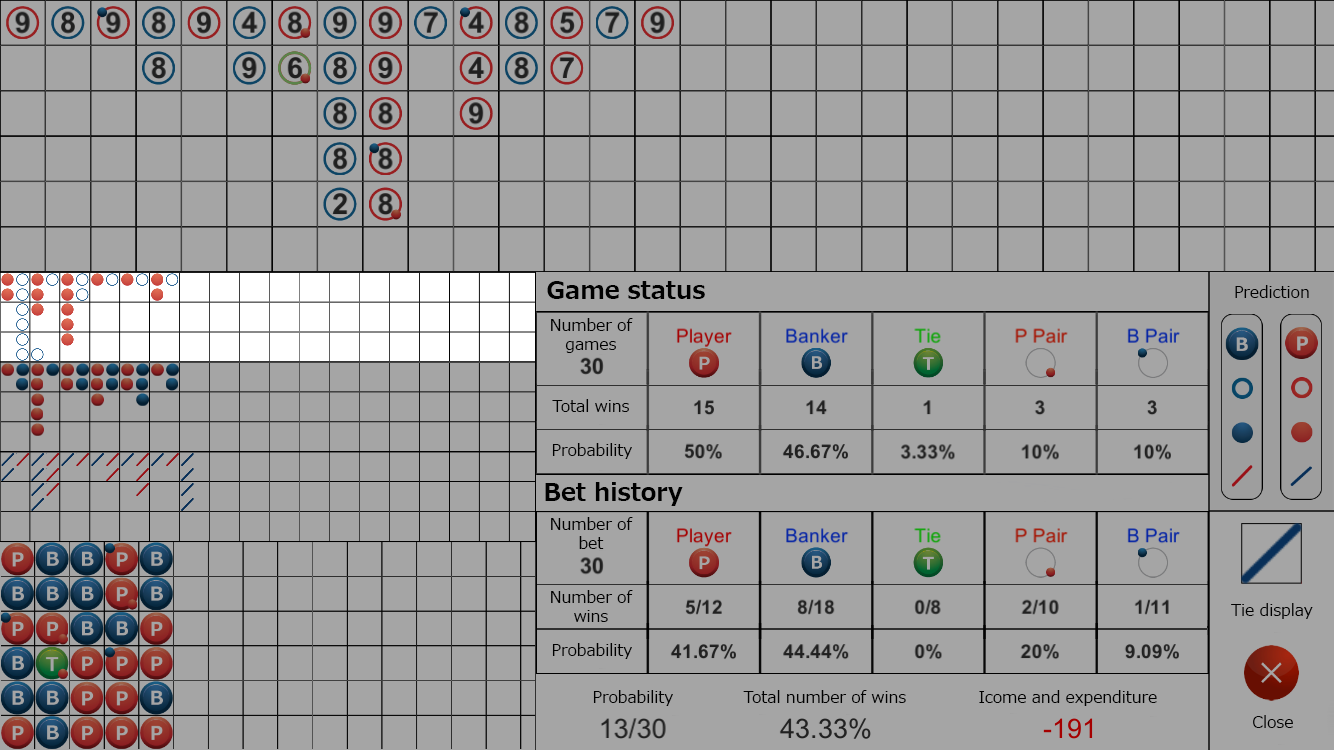 On Oji, you just need to record the flow of the game, but on big eyes, it's easy to display a bit more complicated information.

In the case of the score table above, Player has won in the first row, but without a second consecutive victory, Banker has won the next game. And Banker did not win any, and the third game was won by the Player. Therefore, the first row will have only one player winning, the second row will have only one Banker win 、, and the victory of the third row player will be displayed. At this point, the first and second rows only win at the same time and they do not win in a row, so they are making the same movement and the red color is displayed on the big eye.

There is an exception to the rule of the big-eyed kid and when a track beyond the previous row continues, a blue is displayed because it is a different motion at the time of excess, but if a trail is multiple than continue, all will continue There is a rule that red is displayed and blue is displayed when the trailing stops. In the above scoreboard, Player won one of the seventh rows of the boulevard, while Banker won five points in the next eight. In such a case, a blue will be displayed when Banker has won two consecutive victories, but a red red will be displayed on the big-eyed kid when three or five consecutive victories have been won, and A blue color will be displayed because the player has won the next game. Is displayed. 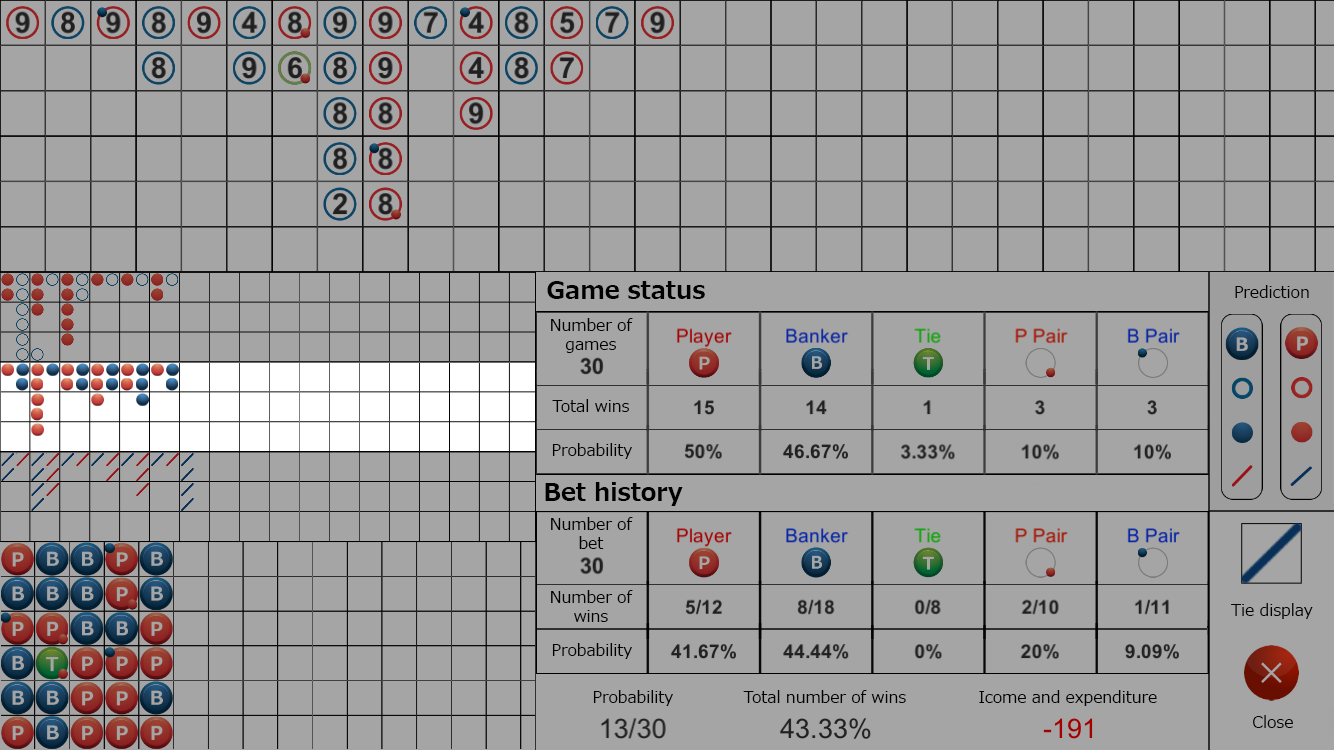 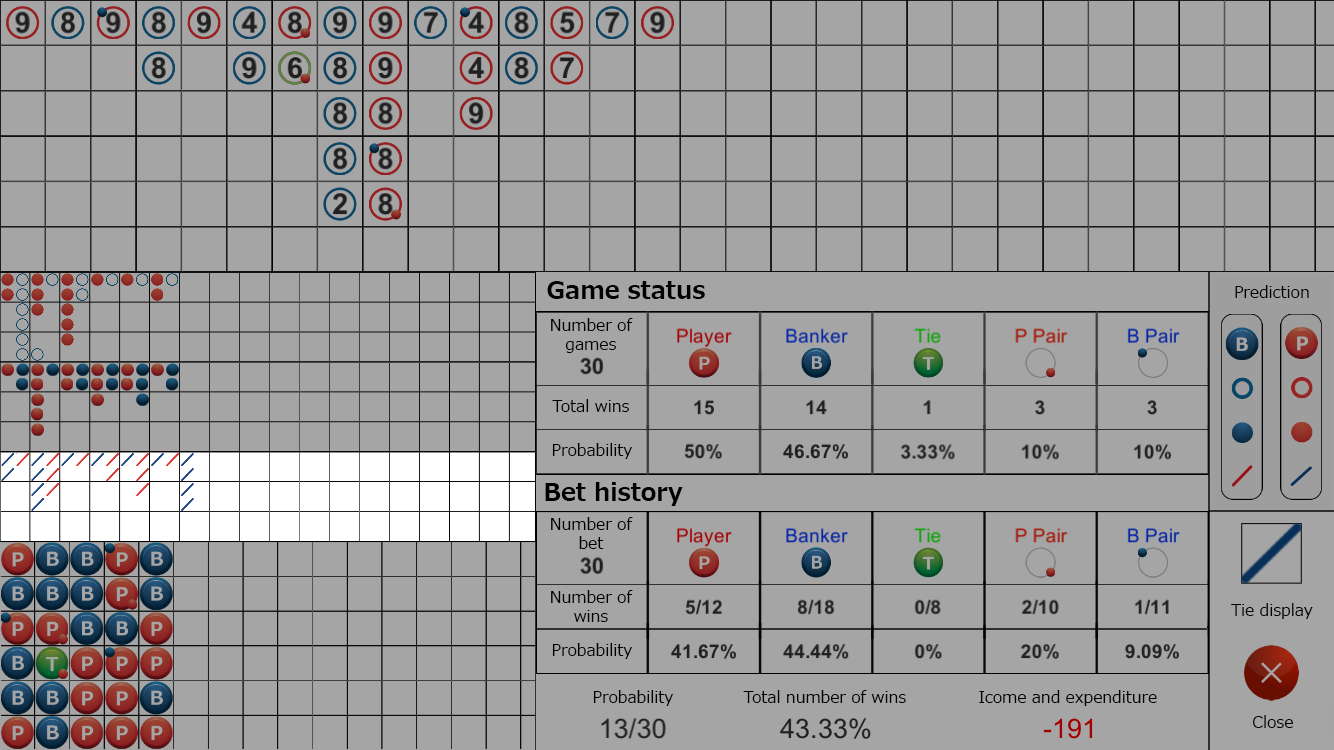 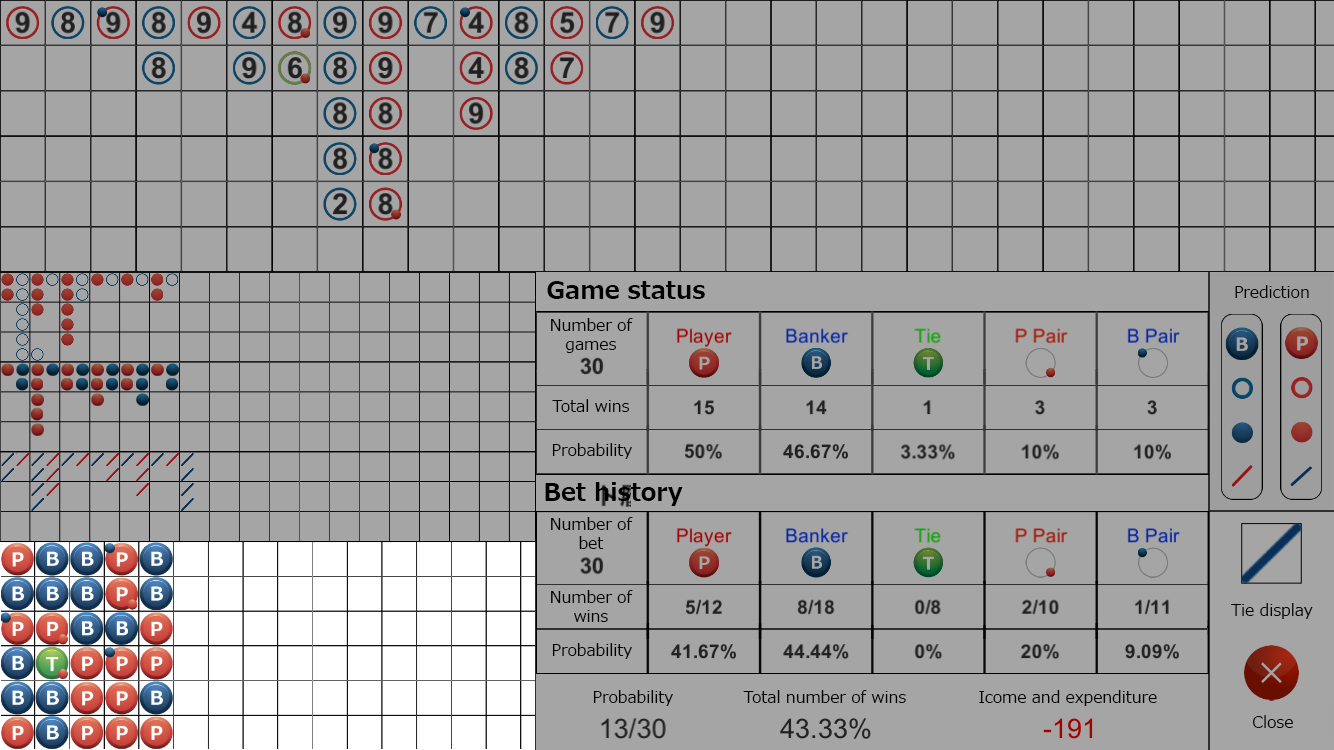 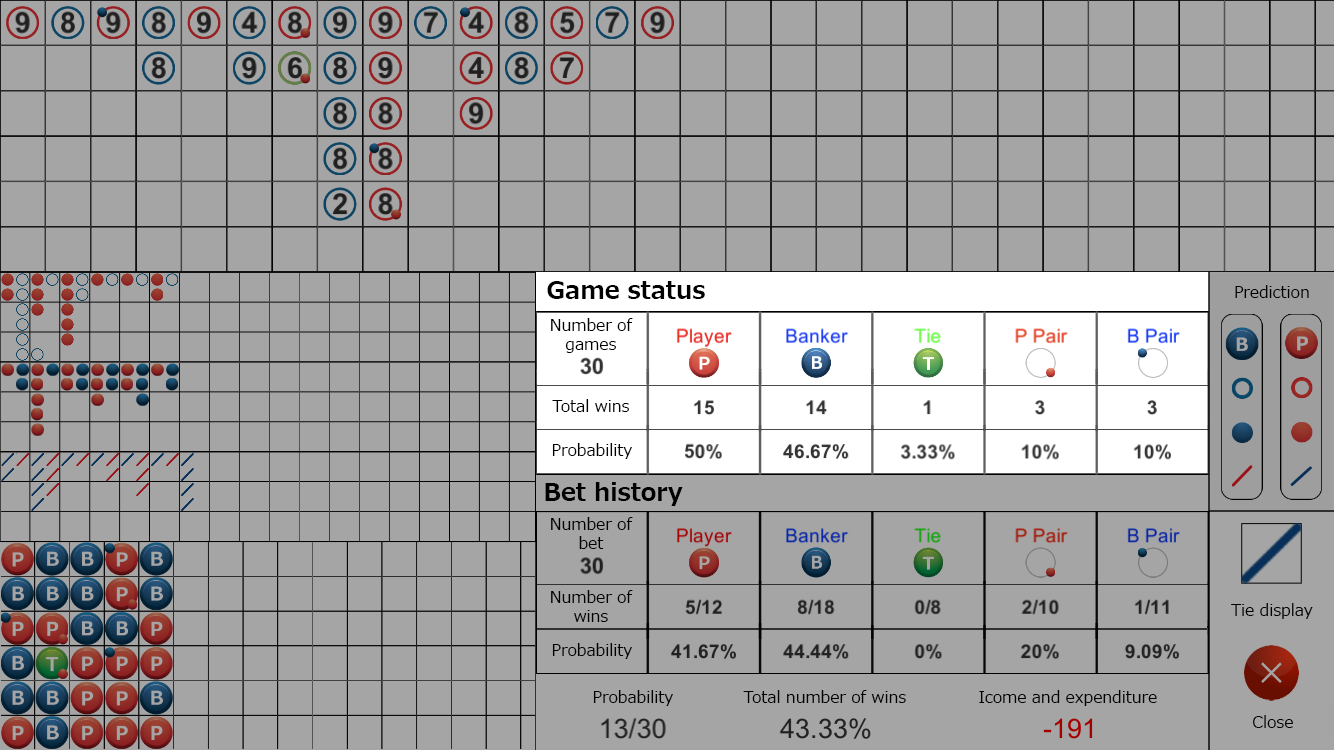 In the game situation, this table shows the number of players and Bankers who have won so far and their probabilities, as well as the number and probability of each role played. This probability is also one of the pieces of information for watching the game flow. 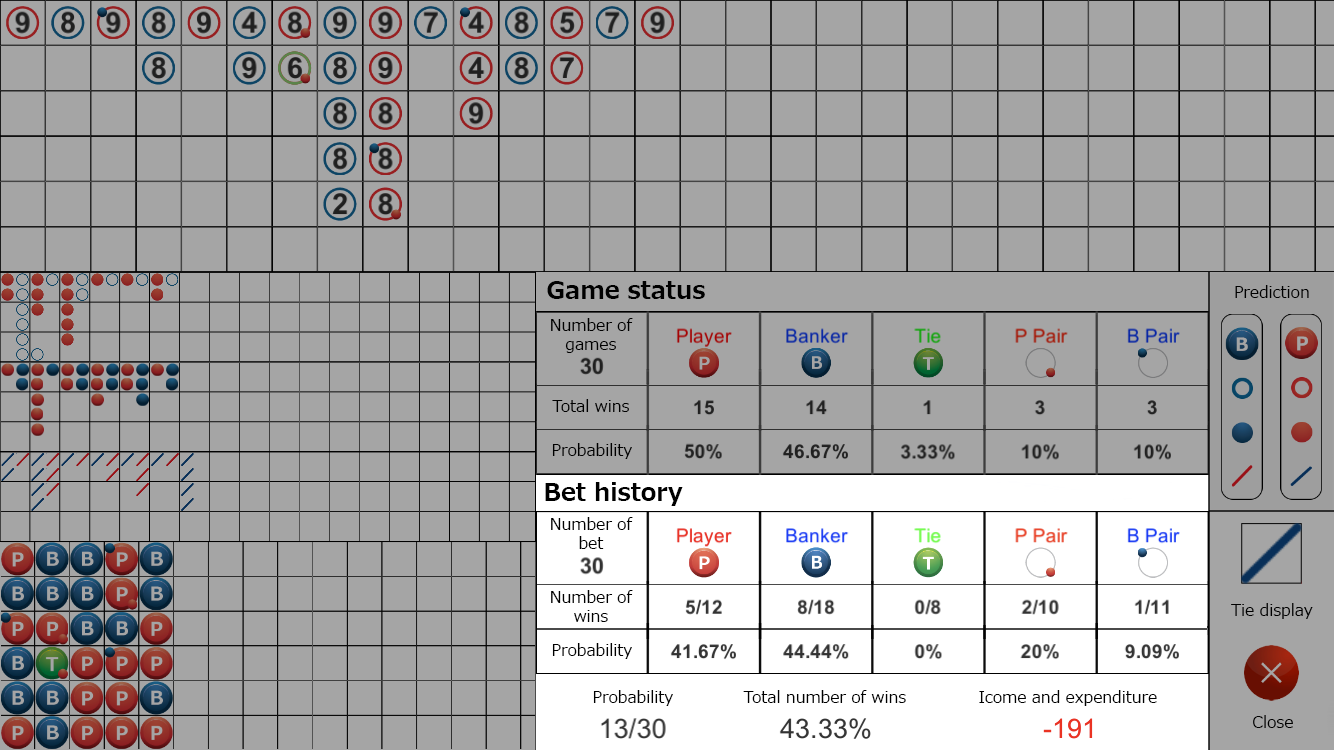 The betting history shows the number and probability of where players have bet and how many times they have won since entering this table.

The balance shows the total amount of tip change since entering this table. 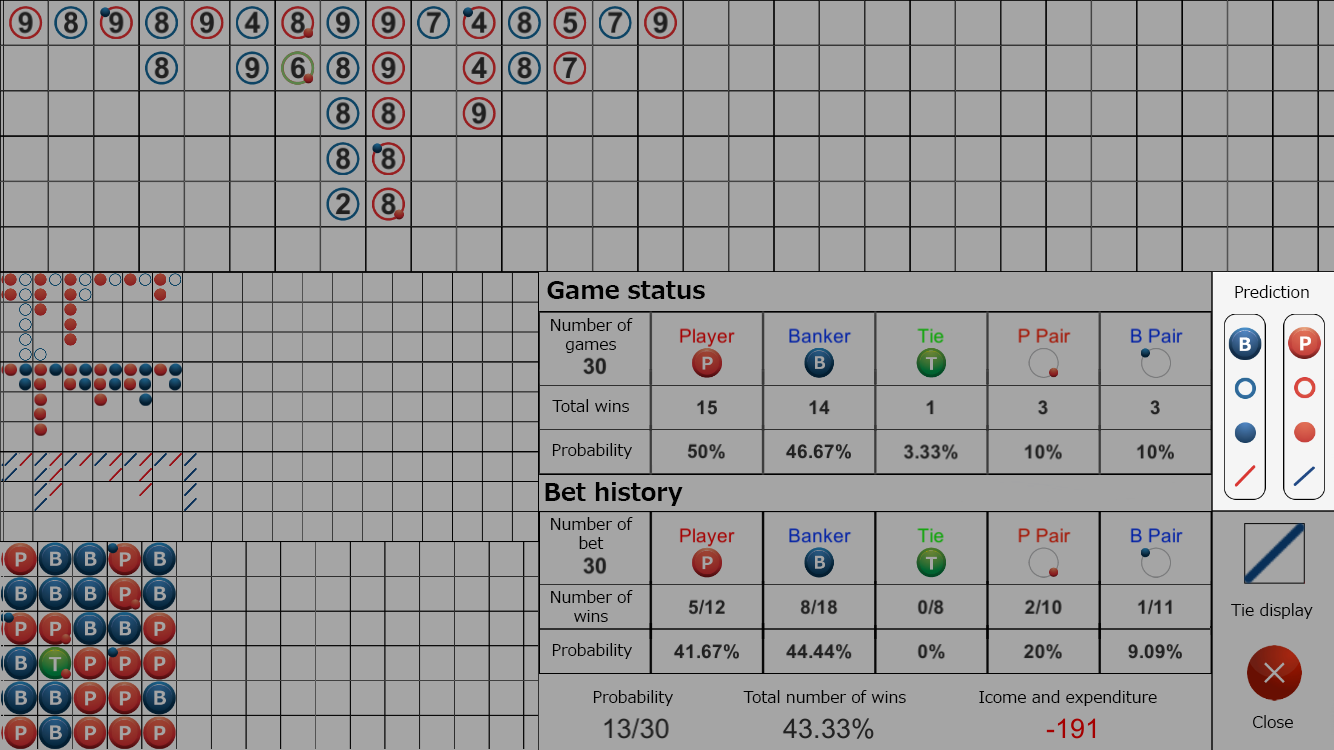 The predictions show that if the result of the next game is Player, then the large eyes, alleys, and Koyuji will look like this, and for Bankers, it will look like this. In other words, if the player wins in the next game, the mark displayed under the red say P indicates that the large-eyed child will move in the same way and the red display will be displayed. Is displayed, and Koyuji moves differently from the previous three rows, so it is shaded blue. In other words, in this prediction, the player is likely to win in the next game.

Therefore, many players place bets based on this prediction.